HNBraco was born on Cazin, a small town in Bosnia and Herzegovina, and grew up with two sisters. As an average brother, he had to start working early, which is why he had to put art on ice first. At school he was always an art lover boy.
He married in 2000 and moved to Germany at the same time as his childhood sweetheart. From scratch, they built a stable standard of living in the metropolis of Munich and had two children.
Ten years later he finally had the opportunity to pursue his talent and rediscover the art for himself. With the help of various seminars and training courses he developed his own personal style. Close to reality with a touch of abstraction.
HNBaco used every spare minute – not only in his studio, but also in nature – to conjure up one painting after another. From drawing with a pencil to painting with a thin brush to artistic wall painting, he has tried everything that can be clearly seen in his works. The individuality and intensity of the colors is so extraordinary that each work seems to tell its own story.
In 2017 he finally reached his turning point. Together with a colleague, he set up his first art exhibition, which was the starting scene of his artistic career. A year later his next vernissage took place, organized by the Artist Club Munich.
This caught his attention, which earned him a limited space in the Kunstlabor art project. The three-month project took place on 5000 m² in an office complex, created by 50 different national and international artists.
At the moment he focuses on painting portraits, but also experiments with other techniques such as linoleum printing. 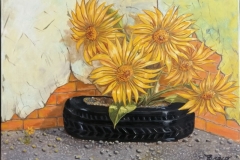 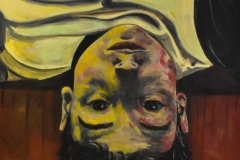 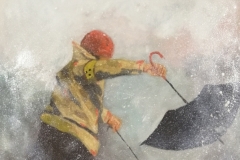