abstract painting to sculpture, from photography to installations. Her works have been auctioned and chosen for an exhibition in the prestigious ‘’Reggia di Caserta’’. Her paintings are shown regularly in International group exhibitions n Italy and abroad. Recent exhibition saw her in Bruges Utrecht, Paris, Zurich, New York, Munich, Krakow, and London. She is founder and President of ARS – Cultural Movement, an association, which deals with development and circulation of contemporary art.

She started her career as a photographer 26 years ago. Her motto is: “Good photos impress, convince and transmit a message. I compose pictures of the extra class in line with your ideas and wishes through mob

ile, modern equipment, a sharp look feeling for the right motive at the right moment.” She has been working as a self-employed mobile photographer since 2009 and has refined her technique and her “eye” in a number of seminars within the last years. During the workshop “Munich nightlife” she trained and improved  creative lighting technique, dealing with the existing light and the effect of artificial light sources in the night. She then focused on how to elaborate and capture the movement in the picture by zooming in and pulling along, the creative in-motion darkness, unusual and interesting points of view, as well as to capture an image at the “right moment”. Christina also attended several workshops held by the photographer and photo designer Lars Wunderlich. Here professional portrait, report, product and fashion photography were emphasized. Here she sharpened her look for picture language and the appealing composition of picture series and collages. In 2013 Christina took part in the “photo marathon Munich” and was able to be among the 15 winners awarded out of next to 300 photographers.She has been a “Nikon professional services” member since 2014. Since 2015 she is a member of “bdfj” (Bundesvereinigung der Fachjournalisten e.V.) as a journalist and has a national and international press card. Her photo shoots of numerous fashion and business events were published in various magazines. 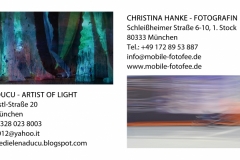 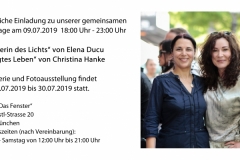