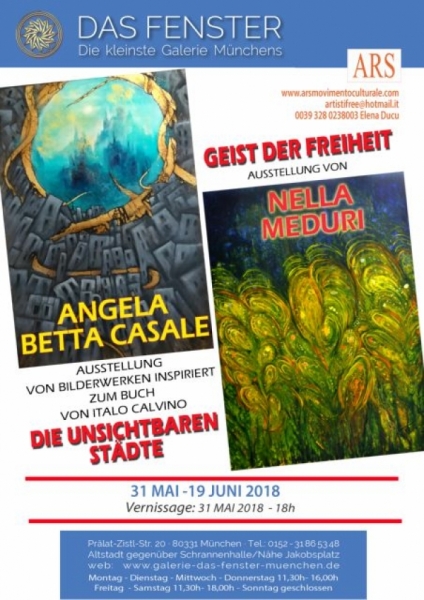 Nella Meduri lives in Turin , where she used to teach Italian letters after taking a diploma in classical studies and a university degree in philosophy. In her childhood and adolescence years she was keen on drawing and painting, with a recurrent tendency to portraiture. As a mature adult her artistic interest has shifted from Man to Nature, which she interprets in its mysterious elusiveness and represents with her extremely personal, imaginative style. In order to perfect her pictorial techniques she still attends courses at Turin Pictor Academy and regularly paints in Angela Betta Casale’s studio . Since 2009 she has been involved in a large number of group shows and in a few solo exhibitions both in Turin and in Piedmont.

Angela Betta Casale was born in Turin in 1954, where she lives and works, she is a free spirit with a vocation for art.  Following her art studies she dedicated herself to a career as a graphic designer, yet she never totally abandoned painting, first of all she was a student of Master Artist Amerigo Carella then as from 1999, she dedicated herself entirely to art, by following a course of research, enrichment, confrontation, yet never one of emulation which leads her more and more towards an entirely personal technique in order to express concepts and sensations.  In her works, we can interpret echoes of Nordic cultures, Celtic sagas, but at the same time we find elements which link Renaissance classicism and a poetic interpretation of contemporary styles. Angela loves playing with quotations, often of literary, musical, dream-like natures and so she builds a world which is always in the balance between reality and fantasy, poetry and myth.

Many are the individual and group exhibitions, held all over Italy and Europe, who Angela BettaCasale  was involved in exposing her paintings.

Dream, living in the spirit of ancient legends, through emotions that transcend the boundaries of time and space. As abducted by the souls of lost creatures, looking at her works, one expects to feel a cold shiver, a nordic wind, the breath of a dragon.